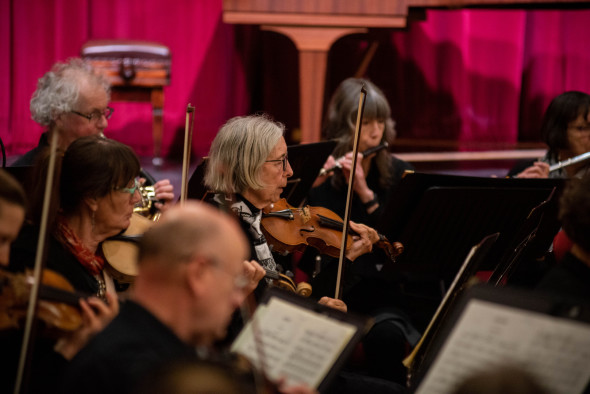 Suppé’s lively and atmospheric overture to The Queen of Spades was a suitably uplifting start to the Axe Vale Orchestra’s first concert of the year which took place in The Gateway, Seaton.  The original operetta (and Suppé wrote around forty of them, mostly totally neglected) was based on a spooky story by Pushkin of magic cards, deception and madness.  Fortunately, Suppé modified this story to a more light-hearted love story and reflected this in the sparkling overture, played with great panache by the AVO, bringing out both the mystery and the rollicking fun.   Those of a certain generation may have smiled as they remembered this music from numerous Mickey Mouse and Tom and Jerry cartoons!

Just a few days before Chopin’s birthday we heard his glorious Piano Concerto No.1. This was an early work and apparently a bit less difficult to play than his later works; all things are relative!  Vyvian Bronk was an outstanding soloist asserting the piano’s supremacy from her first grandiose entry.  She made light of the fiendish passage work and imbued the song-like melodies with a lyrical beauty.  This is very much a concerto for piano with orchestra as Chopin created it to promote his own prodigious talent with the orchestra playing an often elusive accompanying role just adding touches of colour.  This requires great concentration; they managed it excellently.  The energetic finale in its Krakowiak dance rhythm was suitably quirky like the city of Krakow itself.  How fortunate to hear such a thoughtful and sensuous performance.

Our conductor Arturo Serna took us into Mozart’s Paris Symphony.  The title is the clue : Mozart not only wrote and first performed it there but consciously modified his style to appeal more to the Parisian audience.  Mozart was no mug.  The trumpets and timpani produce a dramatic effect and the fanfares continued into the finale.  This finale was well performed by the AVO, not an easy task as there were a lot of separate lines of melody and individual instrumental entries.

Well done Arturo and the AVO.  I look forward to the next concert,  a special commemoration of the Queen’s Platinum Jubilee with appropriate music.  It’s on Sunday 22 May in the Feoffees Hall, Colyton.

"How thrilling it was to be part of a live audience in front of a symphony orchestra.  You could feel this excitement in the Minster Church, Axminster, as the Axe Vale Orchestra gave its first live concert since February last year.  Mendelssohn’s overture The Fair Melusine tells the familiar story of a water nymph who falls in love with a mortal, except this nymph inconveniently turns into a mermaid once a week.  Well, you can imagine the problems.  The orchestra captured the watery opening beautifully and then went on to portray musically the conflicts which followed.  And did those tunes originate in Scotland?  The young Mendelssohn was on a walking holiday there a couple of years before he wrote this overture.

A real feast of tunes followed when the AVO played the first Suite of English Folk Dances written by Ernest Tomlinson.  They caught the dance-like feel of these pieces so well : from the opening violin solo played by the leader Jane Bultz, through an oboe solo with gossamer-like violin harmonics, to the powerful full orchestra of the final dance.  And how familiar they made the tunes sound; do we know them from theme music perhaps?

La Calinda is the popular dance from Frederick Delius’ opera Koanga.  Despite it’s being probably the first opera based on Afro-American tunes it is now neglected and wasn’t published until after Delius’ death.  What we heard was a truly delightful rendition of this gentle, tuneful dance, one which always brings a smile to my face.  Well done conductor Arturo Serna and the AVO for making such familiar music sound so fresh.

It’s easy to be dismissive of Joseph Haydn.  He may have been overshadowed by Beethoven but just listen to his music and then dare to say he wasn’t a genius.  The well-known Clock Symphony is full of remarkable twists and turns, ably negotiated in this performance.  This takes a lots of skill to manage so all credit to Arturo and his band.

You hear so much detail just by being there with a live orchestra. They set the bar high for the next concert on 27th February at Seaton Gateway."

The concert was a triumph. Definitively one of the best so far.

The orchestra played with the perfect speed the overture. It was performed with wit and precision

Throughout the concerto I could feel the orchestra wide awake, listening and reacting to whatever the soloist did.

Mendelssohn: Symphony no 3 ( The Scottish)

However, I have to say the symphony was the very best item

The violins were the absolute stars at the beginning of the symphony with their semiquavers performed flawlessly, together and perfectly in tune. I haven't found a single recording where that is achieved. Big bravo to them!

The woodwind performed with incredible precision and excellent intonation. All the dangerous speed changes were perfectly executed. The slow movement was performed with beautiful tenderness and striking changes of mood and colour.

And the last movement was terrific, fast, furious, loud and with a fantastic royal ending for a gorgeous audience.

The orchestra was stunning in every single way. Bravo!